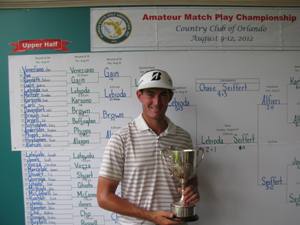 During the morning Semifinal Round, Chase Seiffert started out his day with a hole-in-one on hole thirteen against Joe Alfieri of Lutz. He then birdied hole fourteen and eagled fifteen, to secure his spot in the Final Round against fellow Seminole teammate, Hank Lebioda of Winter Springs. In the Final Round, Chase got off to a quick start by winning the first two holes. Hank then came back and kept the match close on the front nine after winning the third hole. By hole ten, the match was square until Seiffert fired four birdies on the next five holes to secure his victory at 4 and 3. It is Chase Seiffert’s 21st birthday and his third FSGA state championship title. Earlier in the year Sieffert captured the Amateur Championship at The Bear's Club in Jupiter, as well as the Florida Open Championship at the Ritz-Carlton Members Golf Club in Bradenton.

En route to the finals, Chase and Hank each won five matches to meet Sunday afternoon. Hank Lebioda, who earned the 16th seed after posting a 70 in the seeding round, outlasted Bodi Karsono of Gainesville in 23 holes to advance to the round of 16 where he beat Andrew Gain, of Bradenton, 4 and 3. In the Quarterfinal, Lebioda overtook David Brown, of Eustis, 5 and 3 and then defeated Ian McConnell in the Semifinals 2 and 1. Chase Seiffert won both the Round of 32 and Round of 16, 5 and 4. Seiffert then overtook Brandon Jowers, of Shalimar, 3 and 2 in the Quarterfinal.

Since the number of entries received has always surpassed the capacity of the Championship, a qualifying stage was instituted five years ago. More than 300 players attempted to qualify at one of seven sites across the state. In the qualifying, players competed in 18 holes of stroke play in hopes of reaching the Championship at Country Club of Orlando. The Match Play Championship began with an 18-hole seeding round to seed the 64 player field. Single elimination match play followed to determine the Match Play Champion.

Top Players Advance to Semifinal Round

The Country Club of Orlando will play host to the 22nd Amateur Match Play Championship.  The Amateur Match Play attracts the finest players in Florida and serves as preparation for many players who are heading to the U.S. Amateur the following week.

Male amateurs must be a member of the FSGA

Must have a handicap index no higher than 11.4.

$160 ($170 - members who do not have an active FSGA/GHIN Handicap). Exempt Fee includes Championship Fee and Entry Fee for those individuals eligible for exemption. (See below)

18 holes stroke play at 7 sites. During qualifying, each player must use a golf cart. Caddies are acceptable, but he/she may not ride in a golf cart or carry the player's clubs. Players are responsible for cart fees for all practices rounds.

Practice rounds are available one week prior to the championship.  Practice rounds may be played after 12:00 PM on the weekend.  The price for a practice round is $30.00 + tax.  Please call (407) 425-2319 to arrange your practice round.  The proper place to practice your golf swing is on the driving range, hitting multiple shots on the course is unacceptable.

Players in the following categories will be exempt from the seeding round and will be directly placed into the Championship flight provided they meet all entry and eligibility requirements.

The Country Club of Orlando will accept cash and Visa/MasterCard for payment.