The Parent-Child is the largest Florida State Golf Association administered event and the state’s largest Championship. Since 1997, the Walt Disney World Resort has hosted the Parent-Child Championship. Recently this year, Grand Cypress was added to the rotation of courses played which also included Lake Buena Vista, Palm, and Oak Trail. In the 31 and Older division, the father and son pair of Charles Kovaleski and Michael Kovaleski posted back-to-back rounds of 68 for a tournament total of six-under par 136 to win the Championship by an impressive five strokes. Tied for second place were the teams of Gary and Justin Onorati and 2014 Champions, Leonard II and Leonard III Schonfeld. Both teams shot the exact same scores each round consisting of 73-68—141.The Onorati team had the highlight of the tournament with a hole-in-one on the par 3 17th hole! In the First Flight duo Gerald and Jason Camp captured first place while in the Second Flight, Brian and John Mallonee took the win. The 31 and Older division started the tournament at Lake Buena Vista and finished at Grand Cypress.

The 19-30 division, saw mother and son pair of Lisa and Michael Jarnot fire fantastic rounds of 68-66 for an eight-under par 134 and five stroke victory. Johnny and Brandon Ward started out strong on Grand Cypress with a six-under par 66 and finished with a 73 on the Palm course to come in second place with a tournament total of 139. Kolby and Shannon McWilliams won first place in the First Flight and Kris and Steve Brant finished first in the Second Flight. The shot of the day in this division occurred on hole number 15 at Grand Cypress when Jordan McDavid hit his mother, Maria’s, drive into the hole for a double-eagle! 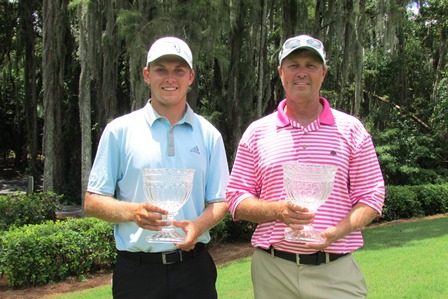 with a rounds of 70-64 for a one-stroke victory, 134 tournament total. Two low rounds were posted by second place winners, David and Joshua Perna to finish is second place, 68-67—135. In the First Flight Cade and Joe Alfieri shot a tournament total 144 to win. The team of John Hill and Jeff Palmer finished first in the Second Flight after a comeback second round and tournament total 159. After a one hole play-off, Jon and Nicholas Veneziano prevailed to win the 10-12 division with 54 stableford points. There was a three-way tie for first place after day two including the teams of David III and David IV Ragan and Tim and Max Haug. The division was played on the Oak Trail Course in stableford format.

Mark and Sean Adamczyk stole first place in the 8-9 division at the Oak Trail Course by one point over Kevin and Griffin Henry with 55 points. The 6-7 division was won by one point as well, by Kevin and Sophia Dyer who finished with 53 points.

A tradition in Florida for more than 20 years, the FSGA Parent-Child Championship includes men, women, boys and girls of all ages. Parents and Grandparents are eligible to play with their children and grandchildren, and there are multiple age divisions so that everyone can participate. For the youngest golfers, ages 6-12, teams play nine holes each day on the Oak Trail Course, a spectacular, executive-length design. This age group uses a modified alternate-shot format with Stableford scoring for both nine hole rounds. Teams with children older than 12, play eighteen holes each day.  Different ages also play a variety of tee lengths to make  sure that everyone is playing from the correct distance. All rounds  begin with morning shotgun starts to allow time for  players and families to enjoy all of the Orlando attractions (such as Sea World, Universal, Magic Kingdom, Wet n' Wild, etc.) in the afternoon. Join the hundreds of families that  have made the Parent-Child Championship an annual tradition. For a look at the 2014 Championship Results click here. 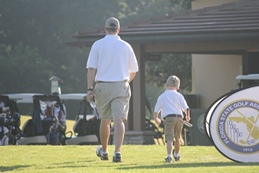 Practice rounds on the Oak Trail Course are offered at discounted rates of $20 for adults and $10 for juniors and are available after 10:00 AM. Before 10:00 AM, the regular rate applies. Players may book practice rounds up to 7 days in advance of tee time. Players may call (407) WDW-GOLF (939-4653) to reserve a tee time Monday thru Friday 8:00am to 5pm. 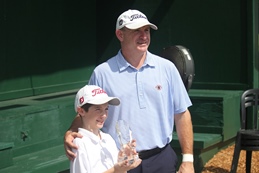 Click here to read the withdrawal, dress code, caddie/spectator and other policies. From the West or East on I-4; go on I-4 and take Exit 26B (Epcot Center Drive) and follow World Drive. Go toward Magic Kingdom on World Drive and go through the entrance plaza. Bear right after you go through the entrance plaza and turn left at the traffic light on to Seven Seas Drive (follow the signs to Shade of Green or the Magnolia/Palm Golf Courses - they are located at the same place) and take Floridian Way (pass the parking lots on your left). Turn right on to Floridian Way and then take a left on to Magnolia/Palm Drive and the clubhouse, parking lot and course will be on your right.