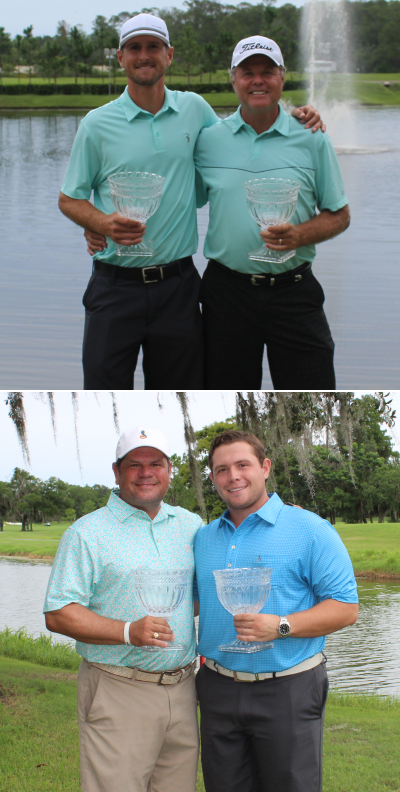 After two days of extreme competition, seven parent-child teams walked away champions in Orlando this weekend. With five courses playing host to this annual fun event, over 450 golfers had the opportunity to test their skills and enjoy the amenities the Orlando-area has to offer.

The 32 & older division produced the lowest scores out of all the divisions after a brilliant 11-under par 61 was shot in the final round. Leonard Schonfeld II and Leonard Schonfeld III, of Jacksonville, had more than enough ground to make up after the first round. The Schonfeld's, after day one, were five back after they carded an even-par 72, yet with a blistering hot second round, the Schonfeld's were able to take a giant surge to the top of the leaderboard. Their 11-under par round of 61 was good enough for a tournament low in all divisions and to capture the title of Parent-Child Champion in the 32 & older division.

In the 22-31 division, the competition was tight with Ralph Ghioto III and Chet Ghioto just edging the competition. Shooting consecutive rounds of four-under par 68, the Ghioto's were able to hold on to the lead and capture the title. After day one, the Ghioto's were tied at the top with Rick & Justin Weinacht, however when the Weinacht's couldn't back-up their 68 and shot a two-under par round of 70, they moved into a tie for fourth with three other teams. Shooting the low-round in the 22-31 division was second place finishers, Paul and Brock Drogosch. The Drogosch's followed up their one-under par first round with a five-under par 67 in the second round, moving them into second place for their division.

The 16-21 division proved to be the most competitive division with the leaderboard looking jumbled after the first round. With nine under-par rounds after day one, the title was anybody's and it was going to take some quality golf shots to clinch the victory. Sitting atop the leaderboard after the first round was both the Ibbotson's and the Ohno's. After pulling off stellar performances on day one with matching six-under par, 66's, both parent-child teams knew it was going to be a race until the finish. Going back and forth all day, it was the Ohno's who came out on top with a three-under par, 69 in today's round. Finishing the tournament with 135, nine-under par, team total, the Ohno's would edge not only the Ibbotson's but also the Perna's by just one stroke.

The 15 & younger division produced a play-off with both the Giovacchini's and Ross's tied up after both rounds of competition. The Giovacchini's began their Parent-Child tournament with a five-under par 67, good enough for third place heading into the final round. The Ross's were four strokes behind the leader after day one with a three-under par 69. Needing to make a move, the Ross's shot an incredible nine-under par 63 to make the charge for the top. Their 63 was good enough for the second-lowest score in all the divisions. The Giovacchini's had less ground to make up, but carded a seven-under par 65 to finish with a two-day total of 12-under par, 132. Both teams, because they were tied, went into a play-off where the Giovacchini's would prevail and become the new Parent-Child champions in the 15 & younger divisions.

For our youngest participants, the FSGA offers a nine-hole parent-child tournament that is hosted by The Oaks Trail at Walt Disney World. Using a stableford scoring method, the three divisions, 6-7, 8-9, & 10-12, had the opportunity to play nine holes each day and compete in the Parent-Child 9-Hole Championship.

In the 10-12 age division, it was Dave Ragan III and Alexandra Ragan that blew away the competition with a stableford score of 61, five better than their next two participants. The 8-9 division was not so much a runaway as two teams sat tied at the top after day two. The Dyer duo made up of Kevin and his daughter Sophia, and the Esteve's, went into a sudden death play-off to see who would walk away with the trophy. After a near perfect chip shot during the playoff, Sophia Dyer carried her dad at the very end and lead her dad to victory.

The 6-7 year old age division exemplified the good hands golf will be in for the future, and the scores proved it. With a comfortable margin of victory, the parent-child team of Rob and Christian Koehn out lasted the competition with their 54. Sitting in second place, four strokes behind, was the duo of Mark Rutland and Grayson Gardell.

The 21st annual Parent-Child Championship is an event that brings together golfers of all ages to compete with someone they get to call their family.

A tradition in Florida for more than 20 years, the FSGA Parent-Child Championship includes men, women, boys and girls of all ages. Parents and Grandparents are eligible to play with their children and grandchildren, and there are multiple age divisions so that everyone can participate. For the youngest golfers, ages 6-12, teams play nine holes each day on the Oak Trail Course, a spectacular, executive-length design. This age group uses a modified alternate-shot format with Stableford scoring for both nine hole rounds. Different ages also play a variety of tee lengths to make sure that everyone is playing from the correct distance. All rounds begin with morning shotgun starts to allow time for players and families to enjoy all of the Orlando attractions (such as Sea World, Universal, Magic Kingdom, Wet n' Wild, etc.) in the afternoon. Join the hundreds of families that have made the Parent-Child Championship an annual tradition. For a look at the 2016 Championship Results click here. Entries will be accepted based upon the order of receipt. Entries received after the the 8:30 or 11:00 shotgun field of 22 teams each is full or after the close of entries, will be placed on an alternates list. Alternates will be contacted in the order of receipt of entry for their respective shotgun division, if and when, a spot becomes available.

From the West or East on I-4; travel on I-4 and take Exit 26B (Epcot Center Drive) and follow World Drive. Go toward Magic Kingdom on World Drive and go through the entrance plaza. Bear right after you go through the entrance plaza and turn left at the traffic light on to Seven Seas Drive (pass the parking lots on your left) and turn right onto Floridian Way. Turn left onto Magnolia/Palm Drive and the clubhouse, parking lot and course will be on your right.