The 68th Women’s International Four-Ball Championship, conducted February 16-17, 2015, was a sunny, but windy two-day event at the beautiful Wanderers Club in Wellington, Florida. This, with a combination of fast greens, and pure fairways made conditions competitive for the participants.

In the Championship Division, round one concluded with partners Charlotte Daughan of Orlando, Florida and Sarah Matin of Winter Garden, Florida sitting at the top of the leaderboard, posting a three-under par 69.  Daughan and Matin took advantage of the par-5’s and 3’s during their round, sitting one-under and two-under par on those holes respectively. Partners Tara Connelly of Palm Beach Gardens, Florida and Meghan Stasi of Oakland Park, Florida, posted a two-under par 70, sitting one back of Daughan and Matin.

When asked about being one shot back, Connelly commented, “We felt like we needed to make a few more putts. In best ball it comes down to having two goes at it and rolling one in. We felt like our putting could be improved.” The duo of Mary Jane Hiestand of Naples, Florida and Judith Kyeinis of Thornhill, Canada, and partners Marie Arnoux of Miami Beach, Florida and Alexandra Frazier of West Conshohocken, Pennsylvania all stood tied for third at even par, 72.

The final round excitement did not disappoint as four of Florida’s top mid-amateurs duked it out for the Championship title in the final pairing. Daughan and Matin had a four-stroke lead over Connelly and Stasi at the turn, but the fight was not over. Connelly and Stasi put together a two-under par 34 back nine in hopes to come out on top. Daughan and

Matin, however, were able to hold on to finish at 141 overall, with a one shot lead over the defending champions. When asked about how they felt after their victory, Daughan said it best, “I think we knew we could [win], but we just wanted to take one shot at a time. We are trying for the USGA qualifier next month, so that’s big confidence for us. It’s nice to win with a good friend.”  Debbie Adams of Asheville, North Carolina and Sherry Herman, or Middletown, New Jersey posted the low final round score of three-under par 69, earning them third place honors at 143 overall.

In the Middle Division, partners Susan Levin and Jill Riehl of Jupiter, Florida were the round one co-leaders posting a two-over par 74, along with Wellington natives Ginny Orthwein and Marlene Streit. Four-time Club Champion Orthwein also recorded an eagle during round one on par-4, No. 16. Mary Kozak of Orlando, Florida and Nicola de Stwolinska of Winter Garden, Florida stood two shots behind them posting a four-over par 76. On the final day, Orthwein and Streit managed to keep it in the seventies despite difficult winds and tough greens, posting a 74-77—151 overall, taking first place honors. Mary Hill of Winston-Salem, North Carolina and Penny Locke of Scituate, Massachusetts took second place posting five shots back at 156, and the team of Colleen Adams and Mary Thomas of Jupiter, Florida

In the Forward Division, Eileen Burke of Delray Beach, Florida and Lanette Gustafson of Ocean Ridge, Florida were co-leading with partners Pamela Cooling of Bonita Springs, Florida and Carolyn Hudson, of Bowie, Maryland at eight-over par 80.  Liz Findley of Bradenton, Florida and Becky Romich of Sarasota, Florida were one back of the two teams posting an 81 first round total. Burke and Gustafson were eager to get into the seventies, and ended up posting a three-over-par 75 for their final round, awarding them first place honors. Burke and Gustafson kept things closer and consistent to round one, posting a seven-over par 79 for their final round. This ultimately gave them first place net honors in the Forward Division, at 126 overall.

Forty-eight teams represented by 19 states and two countries will travel to Wellington, Florida February 16-17 to contend for the coveted title of ‘Women’s International Four-Ball Champions’. This historic event, first conducted by the Jaycees of Hollywood, Florida, has comprised the names of golf’s finest—Babe Zaharias, Louise Suggs, Peggy Kirk-Bell, and others. The format of the championship will be 36-holes of four-ball stroke play, generally known as a two-person, best-ball.

Membership is NOT required

Please join us for the Women's International Four-Ball to be conducted at the Wanderer's Club in Wellington Florida.  This historic championship is being held at one of the finest clubs in Palm Beach County on Monday and Tuesday, February 16th-17th.  The Wanderer's Club is maintained in exceptional condition and will host this championship for the next two years.   For a look at the 2014 Championship Results click here. *Entry fee includes all competitive rounds of golf, Sunday evening cocktail reception with heavy hor d'oeuvres (cash bar), lunch after both Monday and Tuesday's rounds, and gift certificate. Late entries will be accepted subject to a $10 late entry fee should the entrant gain  acceptance into the field.

To enter, both you and your partner will need to have created a free, online account at this website.  Once both of you have accounts, you will be able to select your partner and submit an entry.  If you or your partner already have an account, you will not need to create another account. The Championship Division may be flighted after the first round based upon scores.

The Middle and Forward Divisions will likely be pre-flighted based on combined team handicaps.

Generally, divisions of more than 10 teams will be flighted, however the Committee reserves the right to flight based on the number of teams and/or the range of combined team handicaps or scores. The valid USGA Handicap Indexes used will be from the February 1, 2015 revision.  Each player must have a valid USGA Handicap Index no higher than 34.0.  However, all teams must have a combined team handicap of 14.0 or less as of January 1, 2015 in order to gain entrance into the field in the Championship Division. Teams may choose which division they wish to compete in upon entry; the Championship, Middle or Forward Division. 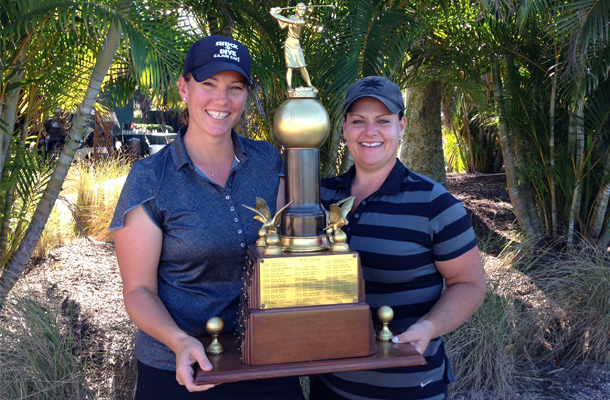 With 48 of the top teams from around the world, Meghan Stasi and Tara Connelly put together an impressive performance en route to capturing the Women’s International Four-Ball Championship for a second consecutive year. The event was held  at The Wanderer’s Club in Wellington, on February 17-18.

As the fourth championship in the Orange Blossom Tour that includes the Harder Hall Women's Invitational, the South Atlantic Amateur (SALLY), and the Ione D. Jones/Doherty Championship, the Women’s International Four-Ball carries a tremendous amount of history and prestige.  First conducted in 1945 by the Jaycees of Hollywood, Florida, the early championships included the names of Babe Zaharias, Louise Suggs, Peggy Kirk-Bell, and other notables.

Directions to The Wanderers Club