T J Shuart, of Coral Springs, captured the Public Links Championship on Sunday with a tournament total of one-under par 212. Shuart was the model of consistency posting rounds of 71-71-70, on the East Course at Jacaranda Golf Club, a place where he has captured two Broward County Amateur titles. Shuart found find himself tied with the 2012 Mid-Amateur Stroke Play Champion, Don Bell, of Port Orange, and Kevin Altenhof, of Melbourne. Altenhof played his way into the playoff with an impressive final round of three-under par 68 on Sunday.  The three players would head for a sudden death playoff where Shuart would make birdie on the second playoff hole to capture the title. Full Story

The East Course at Jacaranda Golf Club recently underwent a $5,000,000 renovation to install new turf, irrigation, drainage and cart paths. Paspalum tee boxes and fairways provide the most playable surfaces for full swings and the introduction of the latest in Tif-Dwarf greens affords players the best putting surfaces available. Architect Bobby Weed has created a course unique in its bunkering, collection areas surrounding the greens, and a multitude of shot options for your short game.

Male amateurs must be bona fide public course players, since January 1, 2012, and have not held privileges at any course that does not extend playing privileges to the general public, or privileges at any private club maintaining its own course. A bona fide public course player may hold incidental privileges at a course not open to the public when such privileges are provided by (1) an educational institution at which he/she attends, or (2) a federal armed service at which he/she is a member, or (3) an industry by which he/she is employed. The FSGA follows USGA guidelines for the Public Links Championship except for the handicap rule. See the USGA website for eligibility guidelines. Players must be a member of the FSGA. 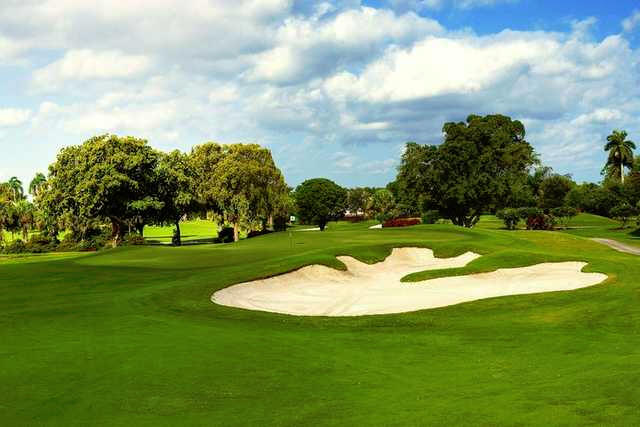 Must have a handicap no higher than 6.4.

Fifty-four holes of individual stroke play. The lowest score for 54 holes will be the Champion. There will be a hole-by-hole play-off immediately following play in event of a tie for the Champion. It is the player's responsibility to be present for any playoff.

Practice rounds are available one week prior to the championship.  Practice rounds may be played after 12:00 PM on the weekend.  The price for a practice round is $35.00 + tax.  Please call (954) 472-5836 to arrange your practice round. The proper place to practice your golf swing is on the driving range, hitting multiple shots on the course is unacceptable.

Click on the hotel icon for hotels in the Fort Lauderdale area.