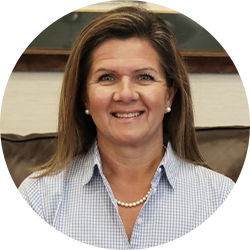 Tracy Dachisen joined the FSGA staff in 2011. She was born and raised in the Garden State, New Jersey, and spent a small part of her childhood on the Eastern Shore of Maryland in the small town of Easton. This is where she picked up her first golf club at the age of 6.

Tracy played competitive golf from the ages of 12 to 24 and was fortunate to have the opportunity to play in many AJGA, collegiate, and national events. She attended the University of South Florida where she played on the Women's Golf Team for four years. GO BULLS!

In 1996, she was reunited with a former New Jersey junior golfer, Peter Dachisen, to whom she has been married since 1999. They are blessed with a son, Peter, who makes the Energizer Bunny look like a slacker.

In her spare time she enjoys spending time with her family and paper crafting.