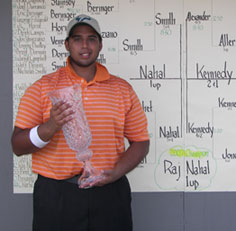 After wining five matches each, Nahal, of Eustis, and Kennedy, from Bradenton, met in the finals of the 2007 Championship. “I was excited to play Chris since I knew him from junior golf,” said Nahal. “I knew it was going to be a good match.” Nahal, 19, a University of South Florida sophomore, took an early lead after making birdie on the second hole. “I made double on that hole twice this week so I just played it safe and hit the ball in the middle of the green,” said Nahal. “That gave me a lot of confidence.” Kennedy, an incoming freshman at University of North Florida, brought the match back to even with a par on #3. Nahal birdied the 5th hole and made par on the 6th hole to go 2 up. “I was just hitting the ball well and putting it in the fairway,” said Nahal. The match was all square after Kennedy birdied holes seven and 11. Nahal then went 2 up after Kennedy couldn’t get up and down and made two consecutive bogeys on holes 15 and 16. Nahal stuck to his game plan of “making pars and letting my opponent make the mistakes.” Kennedy narrowed the gap to one winning the 17th hole. On 18, Kennedy’s 15-foot birdie putt lipped out to give Nahal his first State Championship. “It was a grind,” said Nahal. “I’ve been working hard this summer so this feels great.” Recently, Nahal finished second in the Orlando City Amateur. 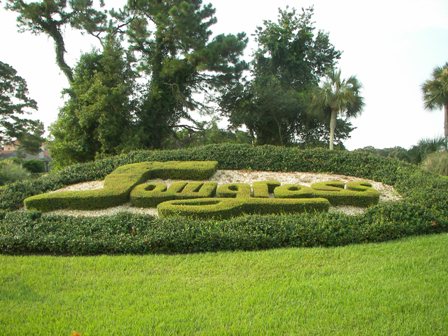 It was a long, hot week of an 18-hole seeding round and two rounds of match play each day. “With every match, I got smarter,” said Nahal. “I learned to play the person not stroke play.” Nahal earned the 12th seed after posting even par in the seeding round. In the first round of match play, Nahal knocked off 2006 Mid-Amateur Champion Bret Voisin, of Orlando, 6 and 4. He went on to beat Benjamin Perdue, of Chipley, in the Round of 32 and then edged out two-time State Champion Kevin Aylwin, of New Smyrna Beach, in the Round of 16 in19 holes. “It was a really good match,” said Nahal. “I was down early but started making some putts to pull through.” In the quarters, Nahal was 1 up after nine holes and continued on to win three consecutive holes to beat Christian Blanchet, of Gainesville, 5 and 4. In his semifinal match versus Florida State University golfer Nicholas Smith, of Ocala, Nahal won 1 up securing his spot in the finals. On the 18th hole, Smith hit his ball into the water to allow Nahal to close out the match. “I just played consistently and let him make the mistake,” said Nahal. Overall, “It was a pretty stressful week,” said Nahal. “It was fun; I like match play.”

Qualifier at The Champions Club at Julington Creek - Qualifier Results 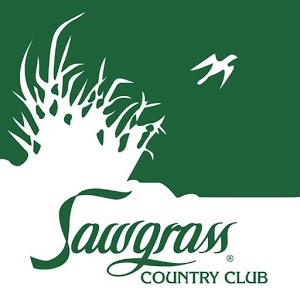 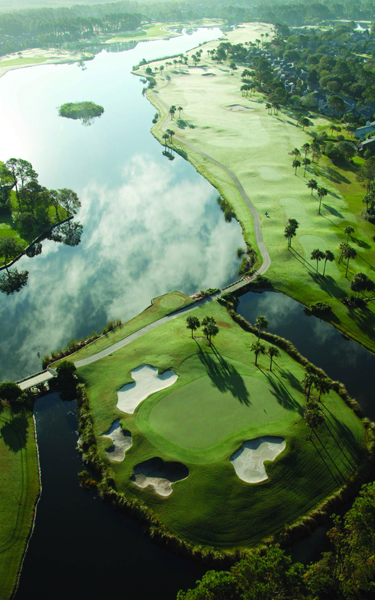 Sawgrass features 27 holes designed by Ed Seay. The Sawgrass Oceanside Course (East-West) was home of the Players Championship from 1977-1981 and in 1984 the South Course was added.

Must be a member of the FSGA.

Exempt Fee includes Championship Fee and Entry Fee for those individuals eligible for exemption. (See below)

Players in the following categories will be eligible for exemption from the seeding round and will be directly placed into the Championship flight provided they meet all entry and eligibility requirements.

The field of 64 will play an 18 hole seeding round followed by match play.

Carts are included for all competitive rounds. Players are responsible for practice round cart fees.

Cameron Knight, of Dade City, defeated Brent Dorman, from Ocala, 1 up at the Country Club of Ocala.