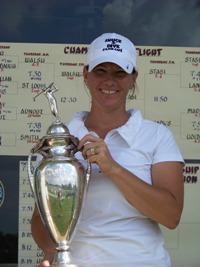 In the final match, Stasi, from Oakland Park, took an early lead with a birdie on the par 5 1st hole. Stasi maintained the 1up lead through seven holes and then birdied the 8th to go 2up. Arnoux, from Miami Beach, birdied the 11th, but Stasi countered with a birdie on the 12th to return to 2up. She then won the 13th to go 3up and she held the lead through the 16th hole where she won the match 3&2 and claimed her second Women's Amateur Championship title (2010 & 2012).

Stasi had support from her husband, Dan, and her father who both followed along during the final match. Stasi's consistent play all week continued in the finals where she hit 14/16 greens, made three birdies and never lost the lead.

In the finals of the Championship Consolation bracket, Gennifer Mendez defeated Carianne Wright 5&4. Mendez, the 2005 and 2008 Women's Amateur champion, fell to local Diane Lang in the first round of matches which moved Mendez into the consolation bracket. Solid play from Mendez held off the talented high school junior from DeBary in the final match.

Tough Competition for Women's Am

Top Players Advance in Women's Am 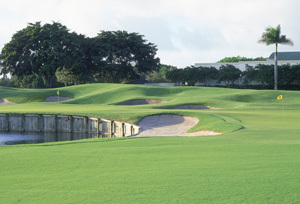 Must be a female amateur member of the FSGA.  And must be (1) a resident of Florida (reside in Florida at least 4 months per year, have otherwise established legal residency or graduated from a Florida high school and presently attending an out-of-state college); or (2) a military personnel or a dependent of a military personnel based in Florida on active duty.

Must have a Florida USGA GHIN Handicap no higher than 34.

18 holes of individual stroke play qualifying on Monday to determine Championship flight. Field flights will be pre-determined based on handicaps. The first round matches will begin on Tuesday morning, with the second round matches and consolation matches scheduled to begin Wednesday morning. Quarter-final matches and consolation matches will be played on Thursday morning followed by the semi-finals that afternoon. The finals will be played on Friday morning.

Practice rounds will be available on May 6th for those qualifying for the Championship flight on Monday, and on May 7th for those who will be playing in the Field Division. The cost of practice rounds is $30.00 plus tax. Players will be responsible for direct payment of any fees for the practice rounds. The number to call for practice round times is (954) 384-4653. The proper place to practice your golf swing is on the driving range, hitting multiple shots on the course is unacceptable. 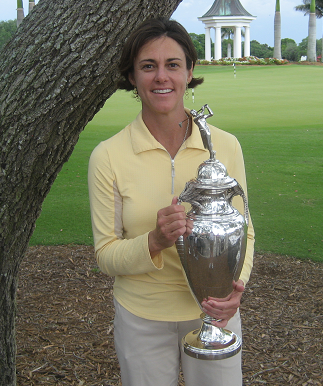 Page Halpin, from Osprey, defeated Ginger Howard a 3 and 2 to win the title at The Oaks Club.

Click here to read the spectator policy.  Spectators and caddies are always welcome at FSGA Championships. Only players are allowed to ride in carts. If a player employs a caddie, the caddie MUST walk and the player's clubs must remain on the golf cart.

Please call (800) 321-2211 to request a reservation under the FSGA room block or click here to book it online.
You must reserve your room by Monday, April 23rd.

Or, please click on the Hotel icon for hotels in the Weston area.