Jake Kevorkian IV, from Clearwater, faced off against Lucas Trim, from Tampa, in the finals of the Junior Match Play Championship at Wyndemere Country Club. They started their 18-hole match at 7:30 AM and it didn't take long to crown a champion. Full Story

Established by Gerald Livingston in 1981, Wyndemere Country Club is one of Naples' premier golf facilities. The challenging Arthur Hills-designed golf course offers scenic fairways lined with slash pines, lush foliage, and pristine water on 22 out of the 27 holes.

Tournament rounds are scheduled on the White & Gold nines with the White nine playing as holes 1-9 and the Gold nine as holes 10-18. 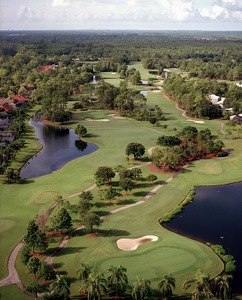 Male amateur golfers ages 16-18 as of July 28, 2012. All players must compete in the age division commensurate with their age as of the last day of the Championship. No players are allowed to play out of their age division

**Players ride in carts for all rounds**

Wednesday, July 25th
18-hole seeding round. All players must return an 18-hole score. Players will be placed in brackets and seeded based on their seeding round score.

Championship bracket - Low 32 scores from the seeding round. A playoff will be held immediately after the seeding round to determine the low 32 players if necessary. All other players will be placed in a bracket based on seeding round scores and will compete in matches in that bracket only.

All ties for bracket determination (except Championship bracket) will be broken according to the USGA "matching scorecards" procedure as described in Appendix I of the Rules of Golf.

All ties for seeds within brackets will be determined randomly.

All players play a match in the morning unless they have a bye. Winners of the first round of matches will play the second round of matches that afternoon. Afternoon starting times will be posted on the scoreboard. Players will have at least 30 minutes between their first and second round matches.

Finals in the Championship Bracket.
The match will begin in the morning and is a 18-hole match to determine the Champion.

Scheduling of matches may be adjusted due to weather and field sizes.

Championship bracket of 32 and three brackets of 16. Flight sizes may be adjusted to accommodate entries.

Practice rounds are available one week prior to the championship.  Practice rounds may be played after 12:00 PM on Saturday and Sunday.  The price for a practice round is $30.00 + tax.  Please call (239) 263-1661 to arrange your practice round. The proper place to practice your golf swing is on the driving range, hitting multiple shots on the course is unacceptable. 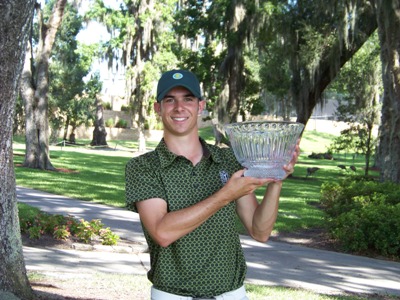 Dustin Dingus, from Palm Harbor, captured the Boys 16-18 age division at Lake Jovita Golf and Country Club by defeatingConnor Baldwin, 3 and 2, in the final match.

Please click on the hotel icon for hotels in the Naples area.