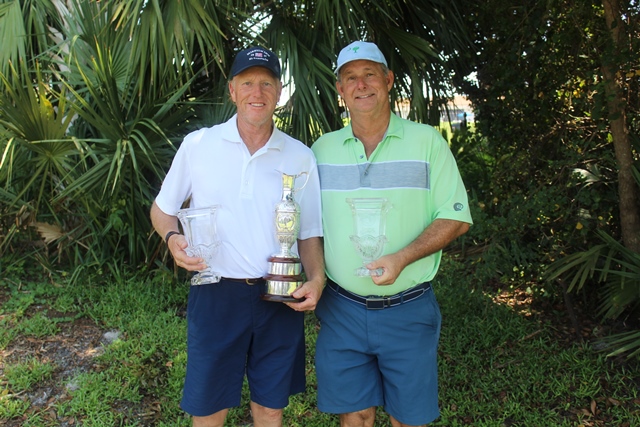 Sugar Mill Country Club, located in New Smyrna Beach, hosted two days of four-ball competition for the mid-seniors. Jimmy Jones, of Tampa, and Mike Finster, of Saint Petersburg, were the definition of consistency with two rounds of 65 earning the team a wire-to-wire victory!  Six birdies from Finster and a birdie on the par three 16th hole by Jones secured the early leady by two stokes after round one. Jones started the birdie train for the team in round two by posting birdies on the third and eighth holes. Finster, who is a past winner with Brian Armstrong in 2017, cared five birdies in round two to secure a first place victory at 130 (-14). The Palm Coast team of Jackson Sampselle and William Yorgey stared and finished round two tied for second, two strokes back, at 132 (-12). Teammates Daniel Debra, of Lutz, and Don Whittemore, of Temple Terrace, posted identical rounds as Sampselle/Yorgey, 67-65, to tie for second. Brent Dorman and Daniel Owen, both from Ocala, posted the tournament low round of 64 on the final day to tie for second.

The team of Stuart Smith, of Saint Johns, and Billy Lodise, of Saint Augustine, played seven strokes better in the final round to claim first place in the First Flight. Smith and Lodise won by four strokes with rounds of 72-65—137 (-7).  The teams of Hixson/Pope, Jackson/Mackintosh, and Dean/Lacamera tied for second place in the first flight at 141 (-3).

The Mid-Senior Four-Ball consists of two days of four-ball competition at Sugar Mill Country Club for players 40 and over. For a look at the Full Past Championship Results click here. 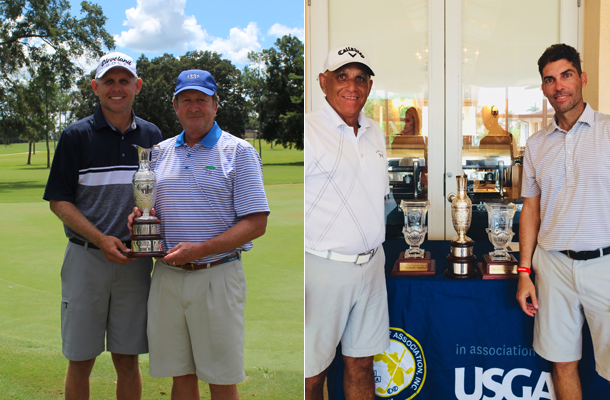