The Men's Net Four-Ball Championship crowned three teams as champions at Walt Disney World's Palm and Magnolia Course.  The tournament, contested on December 2-3, saw players light up the Palm course for the first round and post numerous red numbers on the Magnolia course for the final round.  The teams of Tony Kent / Justin Thomas, Robert Koenigkramer / Theodore Kopec, and Joe Brisley / Tom Weber captured their division titles.

The Under 50 Age Division saw some remarkable scores on Saturday as the two teams making the final group had the two lowest handicaps in the flight!  Andy Weber and Patrick Brisley impressively fired anopening round gross 65 which translated to a net 63 to lead the flight.  Nipping at their heels were the eventual champions, Tony Kent and Justin Thomas after a 64 in round 1.  Blitzing the field on Sunday, Kent and Thomas shot a final round 63 to win by five strokes.

On Saturday, the 50-64 Age Division was responsible for a few of the lowest scores in the Championship's history as two teams carded 12-under, net 60.  Robert Koenigkramer and Theodore Kopec, one of the teams to shoot a 60 in round 1, were able to maintain their momentum as they posted the low total for the second round as well.  Their 60-64--124 is the lowest tournament total in the event's short history.

Finally the 65 & Over Age Division saw a familiar face on top of the leaderboard.  Dwaine Zitko has won this event in the past, but playing with a new partner produced a similar result.  Zitko and John Christensen shot a 61 on Saturday.  Joe Brisley and Tom Weber started Sunday a distant five shots behind the leaders, but were trying to capture the same magic that their sons, Patrick and And, had on Saturday.  The two would shoot a second 66 to finish in first place by two strokes with their 132 total.

Named for its majestic magnolia trees and host site of many PGA Tour events, the Magnolia course features elevated tees, spacious greens and challenging water hazards. Wide fairways invite you to hit the ball and hit it long, but beware - 11 of the 18 holes boast water hazards and 97 bunkers dot the landscape. Sloping greens, tropical sands, and beautiful lakes characterize the challenging Palm Course. For a look at the 2016 Championship results click here. Round One & Round Two: 8:00 AM shotgun start. **No pairings request will be honored for this Championship**

Practice rounds are available one week prior to the championship on a space available basis. Practice rounds may be played after 12:00 PM Friday - Sunday. The price for a practice round is $45.00 plus tax. Please call (407) 939-4653 to arrange your practice round. The proper place to practice your golf swing is on the driving range, hitting multiple shots on the course is unacceptable.

Also, the Championship Committee is permitting practice on any competition course or part of any course on any day of or between rounds of the Championship. As a result, competitors are allowed to play a practice round on the course remaining to be played after the first round. 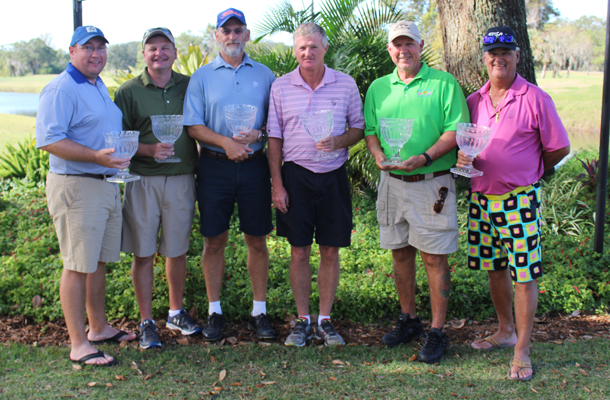