After the first two rounds of stroke play seeding, the field was successfully cut to 16 players for both boys and girls. Madison Hewlitt advances into match play, leading the girls division on both days with rounds of 69 and 72. Jaqueline Putrino,Celeste Valinho and Caroline Patterson would join her. Other notables to have moved on include this year’s Girls Junior Champions, Chloe Schiavone who took the final seed. Onto the boy’s side, Gabriel Hegerstrom and Justin Ross tied for the lead with a total of six over par. Yuze Zhang, Brendan Valdes, and Joshua Stewart followed closely behind.Andres Atrio and Clay Tucker would claim our final to spots to get to an even 16.

The first and second round of match play began with dreams and hopes and ended with four players getting closer to reaching those dreams. First, in the girls division,our number one seed, Hewlett, was defeated by Schiavone. Schiavone would then continue her winning streak by defeating Sarah Edwards in the quarterfinals. Caroline Patterson would take a dominate place in the tournament as she defeated Madison Heideman. Patterson then takes on Kaitlyn Schroeder winning 3&1. The last twoplayers to move into the semifinals are Skylee Shin and Celeste Valinho. Shin played the longest match of the day going to 20 holes with Kayla Holden in the quarterfinals match.

Moving onto the boys, Hegerstrom wins his first match but losses against Andre McLauchlan. Brendan Valdes would move on all the way to the semifinals after defeating Andrew Clark and then Joshua Stewart. The final two players to advance are JustinRoss who took an easy win of 4&3 against Michael Wu. Lastly, Joshua Pritchet would also move on. Pritchet closed out both his matching without reaching the eighteenth hole. Brendan Valdes played the longest match that extended to 20 holes.

The semifinal bracket consists of two matches played between Chloe Schiavone and Carolin Patterson, and Skylee Shin and Celeste Valinho. Schiavone took a commanding lead and won her match 5&4. Shin and Valinho battled it out all throughout the day and had to take the match to two more holes. Shin won the twentieth hole to advance into the finals. Schiavone and Shin will be playing in the final match.
In the boy’s side, Andrew McLauchlan and Brendan Valdes played the first match of the day. It was steady play for both boys. McLauchlan took the win 1 up. The second match was played between Justin Ross and Joshua Pritchett. While both played shot for shot in the beginning, Pritchett began an impress closing streak and won 3&1.

Schiavone and Shin began the final match of the competition early Thursday morning. Schiavone made the first move of the day as she birdies the first and third hole to get to 3 up after three holes. She then extended her lead to 4 up after nine holes. Shin tried to fight her way back with a birdie on the fourteenth hole to keep the match going. Shin would still be three down with four more to play. After both players made pars on the next two holes, the match was set. Schiavone won 3&2. This is Schiavone’s second win this season as she was previously crowned the Girls Junior Champion. Great playing by both Shiavone and Shin. Schiavone will also be representing Florida in the Southeastern Challenge Matches.

The boy’s final match was played between McLauchlan and Pritchett. Pritchett took an early lead after birdying the first hole. However, McLauchlan birdied the next hole. It was then a tight race with both players fighting not to make mistakes. The first nine holes saw McLauchlan 2 up. McLauchlan kept up his steady play in the back nine to stay in the lead even with Pritchett’s two birdies. The match was finalized on the seventeenth hole as McLauchlan made a par against Pritchett’s bogey. McLauchlan won 2&1. Great playing this week by both competitors. Flight sizes may be adjusted to accommodate entries

The event is ranked by the World Amateur Golf Ranking (Girls only). The 36-hole stroke play portion of the Championship is ranked by Junior Golf Scoreboard (Boys & Girls).

Practice rounds are available one week prior to the championship.  Practice rounds may be played after 12:00 PM on Saturday and Sunday. The price for a practice round is $30.00 + tax. Please call 239-482-8378 to arrange your practice round. The proper place to practice your golf swing is on the driving range, hitting multiple shots on the course is unacceptable. 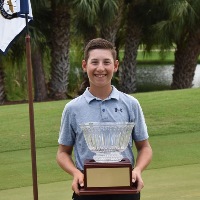 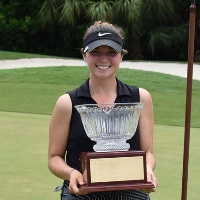