In this unprecedented year, the Florida State Golf Association was not able to host its Annual Dinner. Instead, the FSGA will be honoring this year's Annual Award winners virtually.

Highlighting this year's annual awards are the three newest member of the FSGA Hall of Fame: Karen Korf, Doug LaCrosse and Rick Woulfe. These three exceptional individuals have all been involved with the FSGA for more than 30 years and have done so much for the game of golf in Florida. 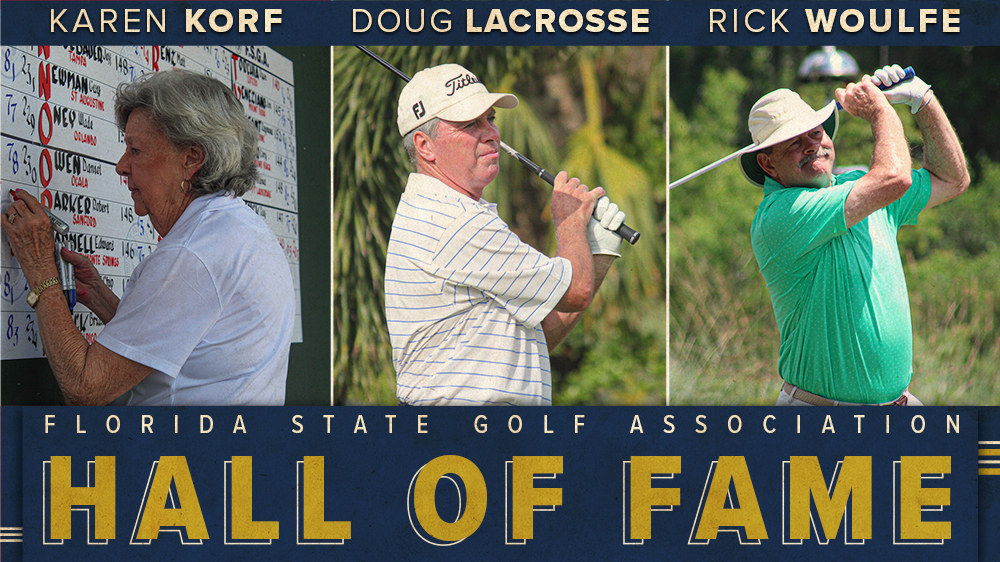 “I don’t even know how to put this into words. I never expected this,” Korf said. “I’m extremely honored to join these remarkable and talented people.”

Woulfe has been a household name in the world of Florida amateur golf over the past 30 years. He has amassed 15 state championship victories in his career and is a 12-time FSGA Player of the Year.

Men's Players of the Year

After a standout season, Tyler Strafaci has been named the FSGA Amateur Player of the Year. Strafaci raised the Havemeyer Trophy at the 120th U.S. Amateur Championship at Bandon Dunes Golf Resort in August, becoming the first Florida Junior Tour alumni to win the U.S. Amateur.

The fifth-year Georgia Tech senior captured amateur golf’s most important victory on the heels of winning at the North & South Amateur and the Palmetto Amateur in July.

Joey Latowski was named the Mid-Amateur Player of the Year after an outstanding 2020 season that saw him take home his first FSGA championship.

The highlights of Royak’s season came with Brian Keenan by his side. The two players took home two FSGA Championship victories this season.

David Anthony earner Super-Senior Player of the Year honors, after a season that saw top finishes and FSGA championship Victory.He raised the trophy at the Super-Senior Championship in October in wire-to-wire fashion.

Women's Players of the Year

Schofill earned Player of the Year honors following a season that saw success at both the state and national level. In July, Schofill raised the 91st Women’s Amateur Championship, overcoming a 10-shot deficit to capture her first FSGA championship. The Auburn University sophomore advanced to the Round of 16 the next month at the U.S. Women's Amateur Championship.

Junior Players of the Year

Coelho was honored with the Boys’ Junior Player of the Year award following a breakout 2020 season, that included an FSGA championship win and success on the Florida Junior Tour. He took home his first FSGA championship in July, winning the Boys' Junior Amateur Championship, while adding an FJT win and five top-ive FJT finishes.

Tuttle earned Girls' Junior Player of the Year honors following a season that saw success in both FSGA championships and on the Florida Junior Tour. Tuttle finished tied for the third at the Women's Amateur Championship in July, while adding a top-10 finish at the Florida Women's Open in August. The Lake Mary native also picked up two FJT wins this season.

Each year, two outstanding FSGA volunteers are recipients of the Charlie Bedford Award. Mr. Bedford was an FSGA Committee Member and volunteered his time both as a Tournament Chairman and Course Rater. Of the over 500 FSGA Volunteers, only one receives this honorable award in each of the following categories: Tournamanet and Course Rating.

Zabytko and Zelnar have both been with the FSGA for over 10 years and their time and dedication is evident. Read more about the two recipients here.

Zabytko has been volunteering with the FSGA for over 10 years, beginning in 2006. Her commitment to the game is unmistakable, volunteering at over 50 events in the last five years alone. Zabytko is well versed in the Rules of Golf, as a Senior Rules Official, and also serves as a tournament chairman in Southeast Florida.

“It’s an honor to be an FSGA volunteer,” Zabytko said. “I’m thrilled that the FSGA had the confidence in me to give me this award and I’m honored to accept it. I appreciate everything the FSGA does and I appreciate being a part of the team.”

Zelner has volunteering with the FSGA for almost 15 years, beginning in 2006. Due to his commitment to volunteering and leadership, Zelner became a Course Rating Captain in 2013. He has worked hard to learn The Course Rating System and has demonstrated exceptional organization, attention to detail, and skilled knowledge.

“It’s means a lot, it’s just special,” Zelner said. “It’s a real appreciation. It’s for doing volunteer work and that type of work just has a special meaning. I would like to thank the FSGA for this honor.”

The Florida State Golf Association has over 500 volunteers around the state. This is a short video highlighting their accomplishments and involvement throughout the year. The Association would not be able to conduct over 600 days of competition each year without the support and dedication of their volunteers.

Coelho was named the FJT Boys 16-18 Points Champion, following a season that saw success in both FSGA championships and on the Florida Junior Tour. The highlight of his year came in July at the Boys’ Junior Amateur Championship where Coelho raised the 66th Boys’ Junior trophy. It was his first FSGA championship victory. He added an FJT victory at Mission Inn Resort & Club in July, while also picking up five other top-10 FJT finishes this season.

Prieto picked up the Boys 13-15 Points Champion title, after a breakout 2020 season, that included three FJT wins. The Miami native started off the year with an FJT win at Palm Harbor Golf Club, the first FJT win of his career. He added another victory in July at the FJT Major at Indian Spring Country Club. Prieto finished the season strong, taking home the win at the Ocala Golf Club to be the only player to capture three FJT victories this season.

Fischer was named the Girls 13-15 Points Champion after strong season, that included her first FJT win and six top-three finishes. She got off to a quick start this season, winning her first FJT event at the 54-hole major at the University of Florida. Fischer added four other top-five FJT finishes in 2020, along with finishing runner-up at the Next 100 Invitational.