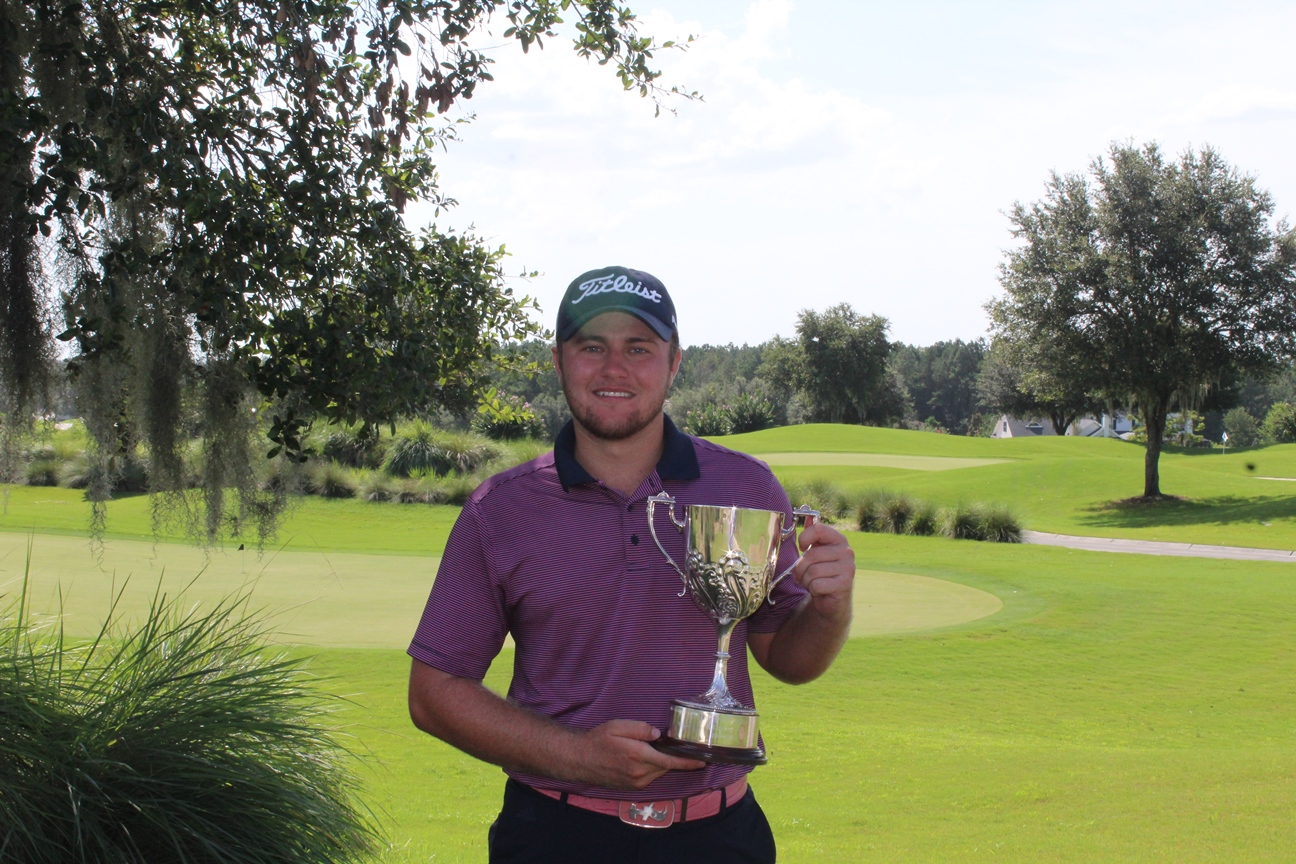 Jacob Huizinga was a force to be reckoned with as he was eyeing down a third FSGA major win in three years, after winning the 2015 Four-Ball Championship and 2016 Amateur Championship. Ricky Hendler was vying to earn his first FSGA Championship win after just starting to compete this year.  A quick start by Huizinga gave the impression that the win was in his hands but Hendler had other plans. Huizinga was 3up standing on the tee box of hole number 13 before Hendler made a three hole comeback with a birdie, par, birdie to take the match to all square. Ties on 16, 17, and 18 resulted in the all square match needing extra holes to determine the Champion. Starting on hole number one for the third time on Sunday, Hendler and Huizinga made three straight pars. On the par four, fourth hole Huizinga stroked in a birdie putt while Hendler faltered to a bogey. Jacob Huizinga, of Orlando, seized his third FSGA major victory after 22 holes against Ricky Hendler!

The battle to the final round began Sunday morning and resulted with Ricky Hendler and Jacob Huizinga earning 1up victories. Hendler took the early lead in his match against stroke play medalist Dustin Dingus. Dingus made the turn three-down to Hendler but attempted to fight back on the final holes winning number 11, 14, and 16. This narrowed Hendler’s lead to 1up but with two ties on holes 17 and 18 Hendler moved on to the finals.

A back and forth match between Jacob Huizinga and Marc Dull resulted in Huizinga advancing with a 1up win. Dull, a tough competitor, started the match 1up after the first hole and managed to stay 1up heading into the final nine holes. Huizinga played tough and brought the match to all square with two holes remaining. A birdie win on hole 17 sealed Huizinga’s 1up victory. Huizinga and Hendler would go head to head in the final match!

The Quarterfinals started in the afternoon where Chip Brooke was 3up on Dustin Dingus through nine holes. Some costly bogeys from Brooke brought Dingus back into the match. Dingus took a 1up lead into the 18th and a good par sealed his spot into the Semifinals. Ricky Hendler continued his hot play by taking down Christian Bosso 4 & 3 and will face Dingus Sunday morning. In the Lower Bracket Jacob Huizinga defeated Joseph Trim 3 & 2 and will face Marc Dull who defeated Matt Leiti with a 4 & 3 win.

Saturday morning started with the #1 seed, Dustin Dingus defeating Samuel Uhland 3 & 1. Chip Brooke knocked off the defending champion, Chris Carlin, in an exciting match that ended 3 & 2 for Brooke. The cinderella run by the #63 seed ended in a close match with Joseph Trim winning 1up. The most anticipated match of the morning was between 2016 Player-of-the-Year Joe Alfieri and Marc Dull who should be on top of the current points list after this weekend. Dull got the best of Alfieri and won the match 3 & 2.

Stroke play medalist, Dustin Dingus survived his first round of match play after defeating 33rd seed, Brian Kennan , 4 & 3. Dingus will tee off in the Round of 16 at 8:00 A.M. and will face 49th seed, Samuel Uhland. With another victory by Christopher Carlin, the defending champion will face Chip Brooke, of Altamonte Springs at 8:08 A.M. The 2016 Amateur Champion, Jacob Huizinga won both his matches 3 & 2 and will play Tyler Shook in the Round of 16 at 8:40 A.M. Perhaps the most anticipated match of the morning will be between third seed, Marc Dull and 14th seed, Joe Alfieri. Both accomplished FSGA players will face each other at 8:48 A.M. for a spot in the quarterfinals.

The Round of 64 began early Friday morning as the match play portion of the championship began. With stroke play medalist, Dustin Dingus earning a bye for the round, he would not begin his match play quest until the round of 32. The quickest match on the golf course came from the first match of the day by 32nd seed, Mattias Wettergren, of Miami and 33rd seed, Brian Keenan, of Tampa. In stellar fashion, Kennan defeated Wettergren 8 & 7 to advance to the Round of 32 and play Dustin Dingus. Defending Champion, Christopher Carlin advanced after defeating Thad Hudgens 2 & 1. Past champion, TJ Shuart also advanced by defeating Andrew Morris, 6 & 5. Coming back this year for redemption, 2016 runner-up, E.J. Grimes just barely survived his match against Joshua Dubberly. Grimes moved on to the Round of 32 after a 1 up victory.

The 26th Amateur Match Play Championship began today as 64 of Florida's finest men amateur golfers teed it up at Southern Hills Plantation Golf Club in Brooksville hoping to finish today's stroke play seeding round with a good enough score to position them well heading into the Round of 64. After a long day on the course, however, it was Dustin Dingus, of Palm Harbor, who grabbed medalist honors and the top seed for match play.

Shooting a two-under par, 70, Dingus, a student at Palmer College of Chiropractic, a college that attends class year-around, began his round with two pars before rolling in his first birdie of the day on the par-3 third hole. Adding two more birdies on the fifth and sixth holes, Dingus got off to a good start and was three-under through his first six holes. With a bogey on the eighth, he would make the turn at two-under par. Playing consistently throughout the back nine, the former Stetson Hatter parred his first five holes of the back nine before carding his fourth birdie of the day on the 385 yard, par-four 15th hole. Standing on the 18th tee, Dingus was three-under par, yet with an uncharacteristic drive that ended up out of bounds, he salvaged an impressive bogey to finish the back nine at even par. With his strong front nine score, Dingus propelled himself to the top of the leaderboard to take medalist honors.  "It was the most stress-free round I've ever played," Dingus said. "It was nice getting back out there after being in school all day."

Three finished right behind Dingus at one-under par, including 2015 Amateur Match Play Champion, TJ Shuart, of Fort Lauderdale. Shuart, along with Kasey Denesevich and Marc Dull will enter match play as three of the four top seeds. Defending Champion, Christopher Carlin sits just outside the top four after shooting an even-par round of 72.Carlin sits in fifth place along with four others after the stroke play seeding round.

The 26th Amateur Match Play Championship is an exciting event that utilizes golf's original match play format. There are six qualifiers slated throughout the state to provide players the opportunity to qualify for this prestigious Championship held at Southern Hills Plantation Club located in Brooksville. For a look at the 2016 Championship Results click here. Those individuals who advance to the Championship through qualifying must pre-register and remit an additional $125 online at the FSGA website at www.fsga.org. Payment must be received by Friday, July 28 by 3:30 pm, or the individual will be withdrawn from the Championship. Championship Fee includes cart fees for all competitive rounds.

18 holes stroke play at 6 qualifying sites. During qualifying, each player must use a golf cart. Caddies are acceptable, but he/she may not ride in a golf cart or carry the player's clubs. Players are responsible for cart fees for all practices rounds. Qualifying sites are yet to be determined. 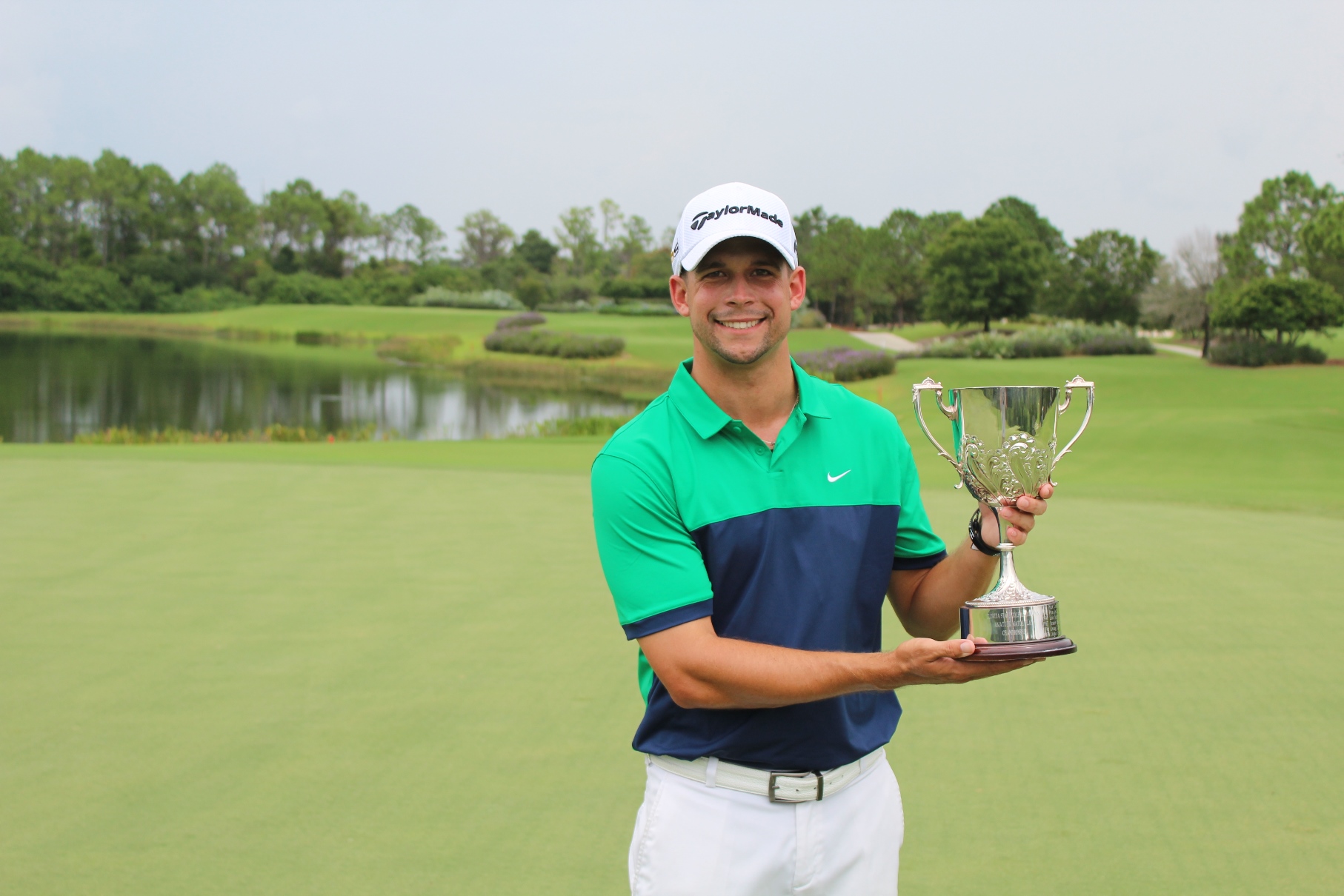 Christopher Carlin started match play as the number one seed and dominated every match, defeating Eric Grimes in the Finals to seize his victory. Carlin ended the final match on the 16th hole for a 3&2 victory at Ritz-Carlton Members Golf Cub in Bradenton.

Practice rounds are available one week prior to the championship. Practice rounds may be played after 12:00 PM on the weekend. The price for a practice round is $35.00 + tax. Please call (352) 277-5000 to arrange your practice round. The proper place to practice your golf swing is on the driving range, hitting multiple shots on the course is unacceptable. 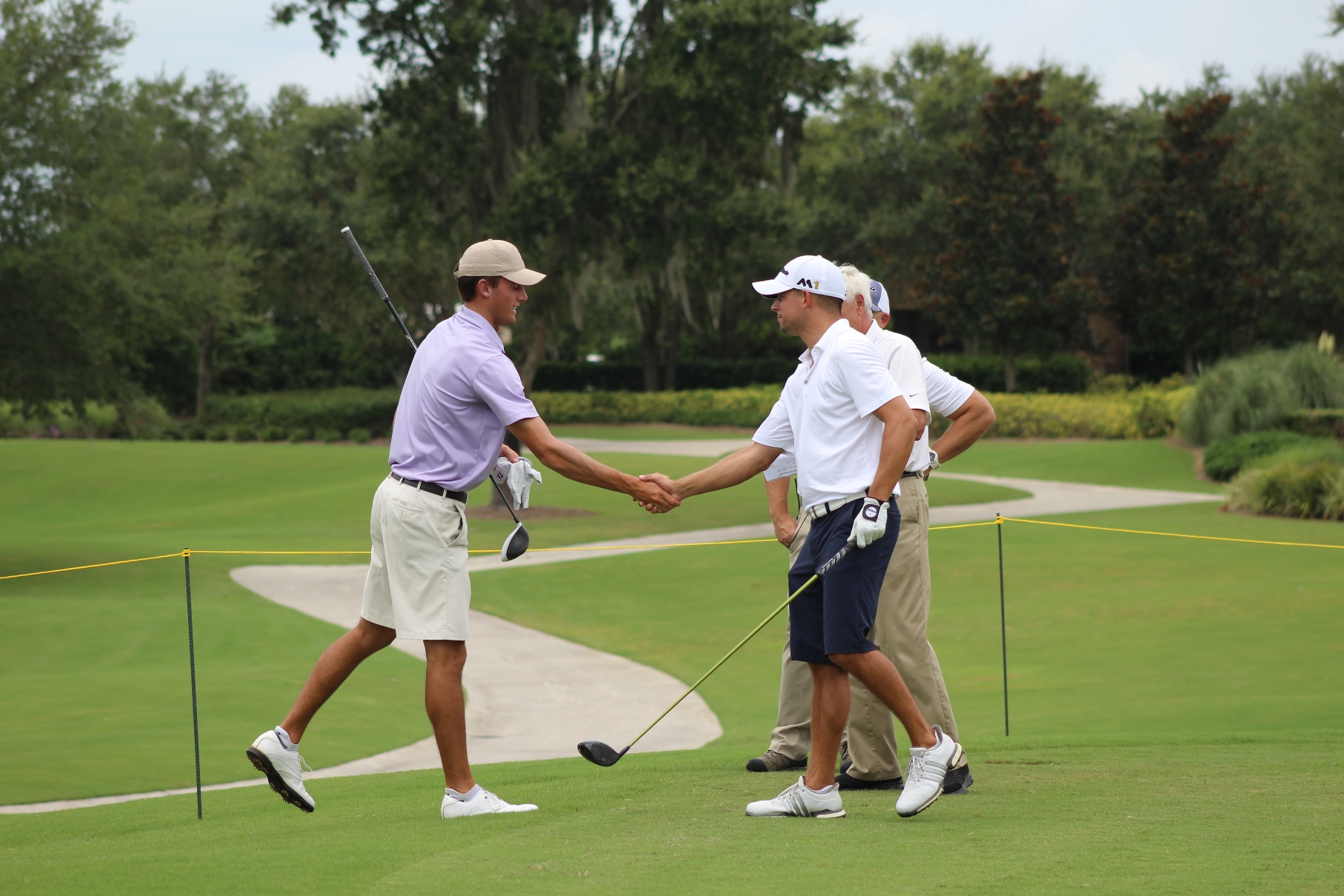 Currently there is no host hotel for this event.