This history of modern hickory golf is made available courtesy of, Jim Davis, the Society of Hickory Golfers.

Modern hickory golf in the United States grew out of so-called “hickory hacker” events begun by Frank Hardison, a top amateur golfer and collector from California. Hardison is credited with organizing the first modern hickory golf event in 1970 at his club, the Santa Ana CC. In 1973, he approached Joe Murdoch, who, with Bob Kuntz, had three years earlier co-founded the Golf Collectors Society, about the possibility of having the GCS host the annual hickory outing.

The two embraced Hardison ’s idea and an annual GCS “Hickory Hacker” was begun, later to become the GCS National Championship, held in conjunction with the organization ’s annual meeting.

By the early 1990s, a few of the more curious and passionate of these hickory players would occasionally meet at their own home clubs for informal hickory golf outings. Tad Moore, one of the earliest U.S. hickory pioneers along with Randy Jensen, Ralph Livingston III, and Roger Hill, estimates there might have been perhaps 15 devoted hickory golfers in the U.S at that time. 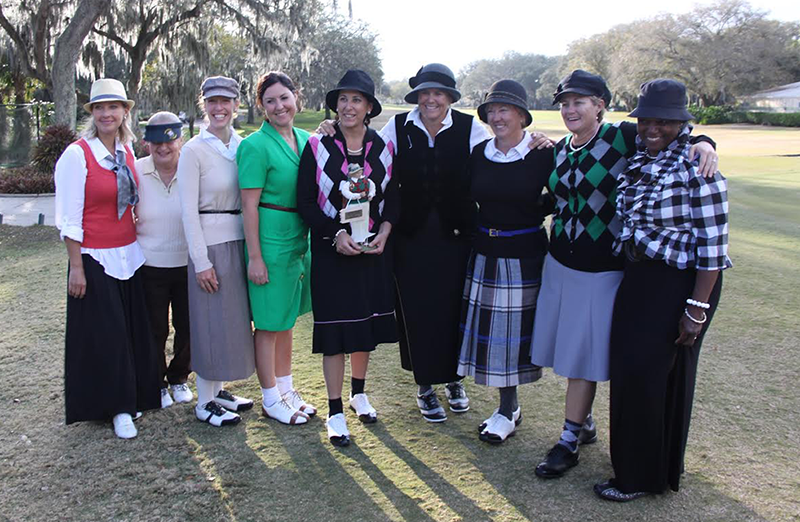 They are recognized as the founders of the Society of Hickory Golfers (SoHG) and Ralph Livingston III is recognized by founding members as the inspiration for the SoHG.

As a result of their discussions, it was decided to create the Society of Hickory Golfers. Its role would be to help popularize the sport, provide guidelines and rules for hickory golf tournaments, establish equipment standards, and serve as a central source of information with regard to resources and maintenance tips for wood-shafted clubs.

This was to be a group for hickory golf players, not strictly golf collectors.

Other key individuals who should be listed and thanked for their efforts in the early going are Vicki Gibboney, Brian Siplo, Rob Ahlschwede, and Philip Truett.

In January 2007, the SoHG ’s executive committee met at the GCS trade show in Dayton, Ohio, to discuss the growth in hickory golf and to re-examine the structure of the SoHG. Originally, the SoHG was to be a guiding force in hickory golf, not a supervisory body.  At that meeting, executive committee members decided to incorporate as a non-profit organization, elect a board of directors, and recruit new members. In addition, as a result of that meeting, the SoHG took a more active role in determining rules for tournaments and creating equipment standards.

In 2008, key SoHG sponsor Breck Speed, then CEO and owner of Mountain Valley Spring Water, along with then SoHG President Ken Holtz, spearheaded a drive to bolster the SoHG with the addition of a new website, the hiring of a organizational secretary, and financial support for the U.S. Hickory Open.

Building on that momentum, the SoHG now has hundreds of members throughout the U.S. and abroad. They are golfers who love the distinctive feel of golf with hickory-shafted clubs. Moreover, they all share an enthusiasm for the rich history and traditions of golf and bring those values to the golf course. Conservative estimates of the total number of hickory players in the world now total about 3,000. And the number is growing.

The SoHG ’s carefully researched equipment and tournament guidelines are embraced by most national and international tournaments and regional playing groups.  Its own premiere event, the U.S. Hickory Open, travels to various regions around the country. In 2020, the event will be at the Happy Hollow Club in Omaha, Neb., where it will celebrate the Society ’s 20th anniversary.

Through its revised website (July 2016), the Society connects its members to a wealth of resources on equipment, history, a handicapping service, regional groups, a tournament calendar, a buy/sell/trade page for clubs, as well as tournament and equipment guidelines and standards. Members receive a monthly e-newsletter and a bi-annual appearance in The Golf, a quarterly journal produced in collaboration with The Golf Heritage Society (formerly the GCS). SoHG pages titled “A Wee Nip for the Hickory Golfer,” appear in each spring and autumn edition.