Origins of the Florida Hickory Golfers

In late 2009, Pastor Kody Kirchhoff moved to Tampa from Omaha, Nebraska.  Omaha was and remains the Midwest’s hickory golf Mecca, with regular hickory outings and well-attended tournaments where players could gather, share information and explore their passion for the royal and ancient game.  Kody realized that the Tampa Bay area, where golf is played year-round and local courses are rich with golf history, was an ideal location for a hickory regional group. 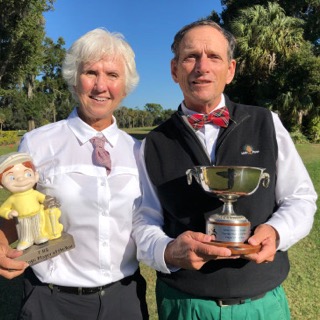 He made contact with Mike Stevens, the teaching Pro at MacDill Air Force Base and as well as an accomplished hickory player (three-time winner of the National Hickory Championship – 2005, 2010, 2012).  Stevens was the only hickory contact Kirchhoff had in the Tampa area, and after he arrived in Tampa, they began playing on a regular basis.

In March 2010 they teamed up to host the first ever Florida Hickory Golfers event.  The venue was Riverhills Country Club in Valrico, Florida. This initial event attracted six players, including two who flew in from Omaha to support their friend. From these modest beginnings began the Florida Hickory Golfers, which grew steadily as they gathered hickory players from across the state and convinced curious newcomers to try the game.

In 2014, Kody turned over the reins of the Florida Hickory Golfers to Mike Stevens, who now serves as the Captain of a robust regional group which numbers over 50.  Several FHG players regularly participate in national events hosted by the Society of Hickory Golfers and even international events, such as the World Hickory Open, held annually in Scotland.

The Florida Hickory Golfers now hold regular monthly events all over central and west Florida. The games are friendly, the camaraderie is fast and if you don’t have your own clubs yet, somebody can help you put together a set for the day to help get you started playing hickory golf.