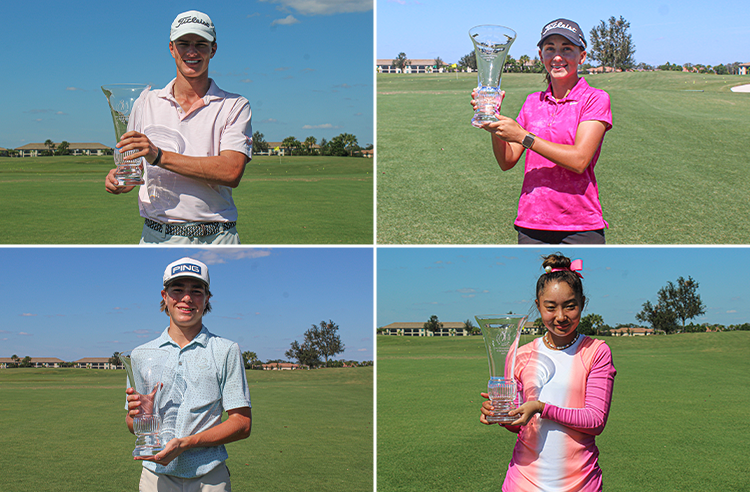 Long secured the one-shot victory in wire-to-wire fashion in the Boys (16-18) division, carding a 1-over ­217 for the two-day championship. This is the first FJT victory of the season for Long and his first Tour Championship win.

In Saturday’s first round, the Lakewood Ranch native posted a 1-under 71 to take a three-shot lead over the field heading into the second round. He carded second-round 71, the lone player in the field to finish the first two rounds under par. Long took the 36-hole lead, finishing the second round with four birdies.

After a bogey early in the final round, Long birdied three of four holes on Nos. 5-8 to make the turn at 2 under for the day. The Boys’ Junior runner-up ran into some trouble on the back side, heading to the 18th at 4 over with a one-shot lead.

Long finished with a par on the 18th to secure the one-shot victory with a final-round 75. Lee Poppell finished the championship in second place at 2-over 218 with rounds of 74-72-72, while Daniel Enrique Vanososte took third place at 3-over 219.

Huber used a final-round 72 to capture the win in the Girls (16-18) division, finishing the championship at 5-over 221. This is the second win of the year for Huber, who took home an FJT win at the 54-hole major at the University of Florida in January, and her second Tour Championship victory.

In Saturday’s first round, Huber carded a 1-over 73 to take a two-shot lead over the field. The Gainesville native took a share of the 36-hole lead with Brianna Castaldi with a second-round 76.

Siuue Wu finished runner-up at 7-over 223, firing a final-round 71. Braydn Smith, who carded a final-round 71, and Castaldi finished in a tie for third at 9-over 225. Wu and Smith were the lone players in the division to post an under-par 71.

Mason earned the two-shot victory in the Boys (13-15) division, carding a 2-over 218 for the championship. This is the first FJT victory for Mason. He began the weekend with a 1-over 73 in the first round, following it up with a second-round 72 to take a share of the 36-hole lead.

Beginning the final round in a tie at the top, Mason got off to a strong start with a bogey-free front nine with a birdie on the fifth. He finished the day with a 2-over back nine to secure the two-shot win.

Miles Russell used the round of the tournament to take second place at 4-over 220, firing a final-round 69. Nicholas Pisarski and Ronav Benak shared third place at 5-over 221.

Ferry went wire-to-wire to pick up the win the Girls (13-15) division, posting a 7-over x223 for the championship. This is the third FJT win of the year for Ferry, who picked up a win at Fairwinds in April and at the Next 100 Junior Invitational in January.

The West Palm Beach native opened the weekend with rounds of 72-78. She was the only player in the division to post an even par or better round on the championship.

She got off to a hot start in the final round with back-to-back birdies to begin the day. After making the turn at 1 over, Ferry finished the day with a bogey-free final nine to secure the victory with a final-round 73.

Kayla Bryant finished second, three shots back of Chang at 10-over 226, while Tsamue Wu took home third place at 15-over 231. 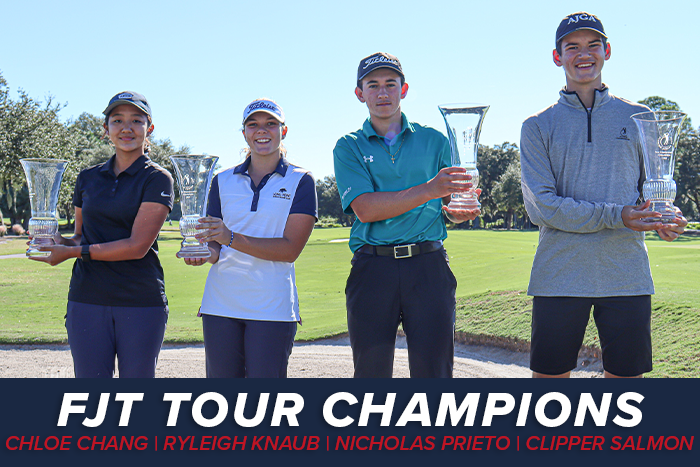 8:00 AM - 9:39 AM - Round one tee times off the 1st and 10th tees
Upon completion of Round 1, players will score at the starting tee and immediately begin Round 2

Practice rounds are available one week prior to the tournament on a space-available basis. Tee times are only available after 12:00 noon the weekend prior.  The price for a practice round is $45.00 + tax. Please call 941-900-2424 to arrange your practice round. The proper place to practice your golf swing is on the driving range, hitting multiple shots on the course, not filling divots, and not repairing ball marks are unacceptable and may cause removal from the tournament without a refund.

We are pleased to offer tournament participants the opportunity to utilize our TrackMan launch moniter, and to have his/her swing recorded on Friday, October 14th. Specifics will be included in the pre-event email. There is no charge for this service.  All information will be posted to the junior's FSGA profile for college coaches to view. Click here for more information.