Clay Tucker, of Atlantic Beach, set the pace starting with an impressive round one score of five under-par 67. Following Tucker, four strokes back, finished Gregory Solhaug and Thomas Salanito tied for second at one under-par after day one.

Salanito, of Palm Harbor, narrowed the lead after posting three birdies for a second round score of 71. Consistency pushed Salanito into lone second place at two under-par as Tucker’s second round of 73 kept him in the lead by two strokes. Tucker finished strong in round two with a birdie on hole 9, an eagle on the par four 13th hole, and a birdie on 15. The tournament low score of six under-par 66 was achieved by Patrick McCann, of Tallahassee. McCann would start the final round tied for third with Gregory Solhaug at even par.

The climb up the leaderboard continued for Solhaug, of Bradenton, in the final round. Brisk temperatures didn’t seem to affect Solhaug’s strong play as he started the round with a birdie. Finishing the back nine with two birdies and seven pars, Solhaug’s final round of two under-par 70 gave him a tie for first place with Tucker. A final round of 74 from Tucker sent the two tied at 214 (-2) to a sudden death playoff. Solhaugh secured his five stroke win with a birdie on the first playoff hole, marking his first FJT win in two years! Salanito fell to a third place finish after a final round 77 and 219 total.

Even par was the score to beat after Madison Tenore, of Destin, took the early lead by five strokes after round one.  Bridget Ma, of Windermere, erased a six stroke deficit with an even par second round, to tie for first with Skylee Shin heading into the final round.

The final round saw a change at the top of the leaderboard as Amelia Williams, of Gainesville, posted a final round 75 to steal the lead. Williams remained steady after a round one 78 and finished with two scores of 75 to win by one stroke over Ma. Three final round birdies secured Williams’ first FJT victory at a 228 total. Despite two birdies in her final round, Ma fell to second place with a 229 total. Round one leader, Tenore, tied Shin for third place, five strokes back at 233.

How Entries are Accepted (Different than 36-hole events) 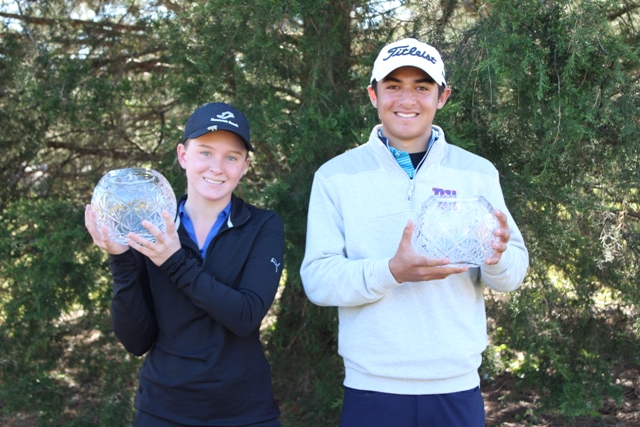 8:00 AM - 9:57 AM - Final round tee times off of the 1st and 10th tees
Awards ceremony immediately following the completion of play

Practice rounds are available one week prior to the tournament on a space-available basis. Tee times are only available after 12:00 noon the weekend prior.  The price for a practice round is $25.00 + tax. Please call (850) 222-0419 to arrange your practice round. The proper place to practice your golf swing is on the driving range, hitting multiple shots on the course, not filling divots, and not repairing ball marks are unacceptable and may cause removal from the tournament without a refund.